This 1966 album release by Capitol Records called The Best Of Chad & Jeremy is an excellent album that includes the following songs: A Summer Song, Willow Weep For Me, If I Loved You, Too Soon My Love, Only Those In Love, Like I Love You Today, Yesterday's Gone, What Do You Want With Me?, From A Window, My How The Time Goes By, and If You've Got A Heart.

This particular album is a promo copy used for radio stations. It is in very good condition. The cover shows shelf wear.

Chad Stuart and Jeremy Clyde met while attending the Central School of Speech and Drama. Chad taught Jeremy how to play the guitar. By 1962, they performed together as a folk duo and formed a band called The Jerks, which Chad described as "the world's screwiest rock and roll group."

The duo's first single, 1963's "Yesterday's Gone", for Ember Records label was their first UK hit. However, Chad & Jeremy's strings-backed sound held a greater appeal in the United States, where World Artists Records released their mid-1960s commercial folk music. As the duo recorded this, they developed their trademark style of singing: "whispering." 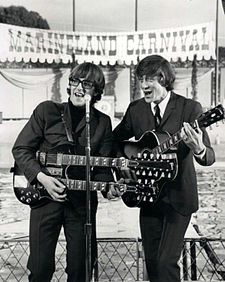 The duo also made several television guest appearances. They portrayed a fictional singing duo, "The Redcoats" (Fred and Ernie), on the 10 February 1965 episode of the sitcom Dick Van Dyke Show that satirized Beatlemania. Two songs were featured in that episode: "No Other Baby," which was sung live in the episode by the duo both sitting on top of a couple of Fender amplifiers, playing Gibson acoustic guitars; and "My, How the Time Goes By," which they introduce as a song by another British Pop Duo, "Chad & Jeremy." The following week they appeared on The Patty Duke Show.

The duo appeared as themselves in the December 1966 episodes "The Cat's Meow" and "The Bat's Kow Tow" of the television series Batman. During the latter episode, they sang "Distant Shores" and "Teenage Failure".

In September 2010, Chad & Jeremy marked 50 years of performing together with a limited-edition CD entitled Fifty Years On.